When Franklin Roosevelt invited Great Britain's King George VI for a visit to the United States, the significance of the invitation did not go unnoticed. No reigning British Monarch had ever set foot on American soil, not even in colonial times. Ever since the Revolutionary War the United States and Great Britain oftentimes experienced tense relations, but Roosevelt's invitation to the King carried great significance in the history of Anglo-American relations because it signified the dawn of a new era in American and British cooperation.

With Europe poised on the brink of war, Franklin Roosevelt realized the necessity of fostering closer ties between the two democracies. Roosevelt believed so strongly in the need for cooperation that he pursued this change in foreign policy at the risk of losing domestic support from the very strong isolationist and anti-British segments of the electorate.

FDR planned every minute detail of the visit to ensure the King's success in winning over the sympathy and support of the American people. Indeed, his efforts paid off; King George VI's visit to the United States became a key component in developing a stronger political and social alliance between the U.S. and Great Britain. 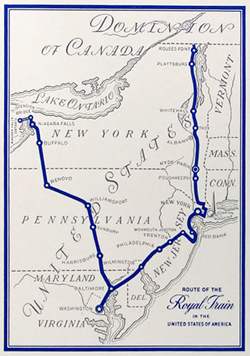 Americans heartily welcomed the British royalty with thunderous applause and adulation when the King and Queen arrived in Washington on June 8, 1939. Crowds lined the streets for a chance to glimpse the King and Queen as they traveled throughout the city. In Washington, the couple was treated to all the formalities one would expect from a State Visit. There was an afternoon reception at the British Embassy, followed by a formal evening of dining and musical entertainment at the White House.

On their second day, the King and Queen took in the sights of DC as they boarded the presidential yacht and sailed down the Potomac River to George Washington's Mount Vernon and then motored to the Fort Hunt CCC camp and to Arlington Cemetery to lay a wreath at the Tomb of the Unknown Soldier. 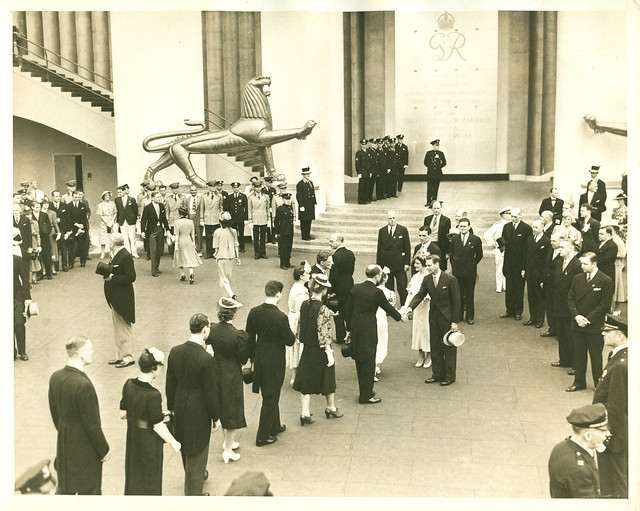 After two days in Washington, the tone of the royal couple's visit transformed from formal to informal as they accompanied the Roosevelts to their home in Hyde Park, New York. The King and Queen's stay in Hyde Park illustrated to the American people that although they were Royalty, they also enjoyed the simpler things in life. In contrast to the formal State Dinner at the White House, dinner at the Roosevelt's Home "Springwood" was described to the press as a casual dinner between the two families; their evening entertainment was simple conversation, unfettered by formalities.

Even more relaxing and informal was the following day's event - a picnic. FDR brought the couple to his new hilltop retreat, Top Cottage, on the eastern portion of his estate for an old-fashioned, American-style picnic. Much to the horror of FDR's mother Sara Roosevelt, the King and Queen of England were served hot dogs on the front porch of the cottage. Although the press made a great deal about the hot dogs (the picnic made the front page of the New York Times), the menu also included more delicate fare fit for a King and Queen. 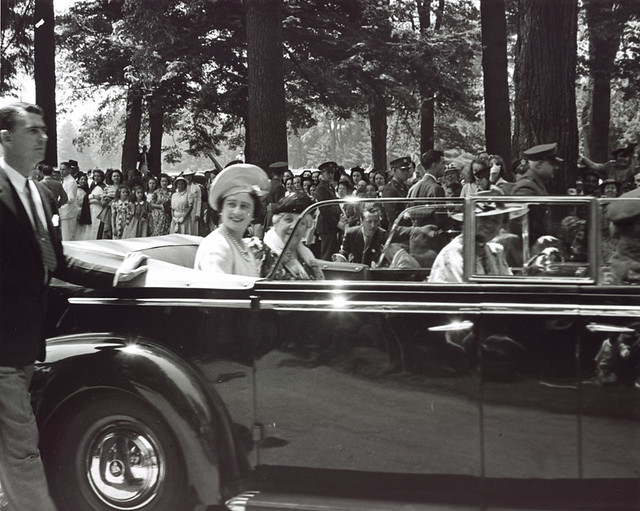 The royal couple delighted in their Hyde Park experience. In a letter to Queen Mary, her mother-in-law, Queen Elizabeth wrote: "They are such a charming and united family and living so like English people when they come to their country house." Their departure was emotional; a large crowd gathered at the small Hyde Park train station to wish the couple luck as they returned to an uncertain and perilous world on the verge of war.

Although the visit appeared to be purely a social affair, interspersed with the pomp and circumstance were serious discussions between the President and the King about the political and military situation in Europe. During this short visit their discussions gave way to policies such as the "destroyers for bases" deal and the decision to provide long-range U.S. Navy patrols in support of the Royal Navy's convoy escort groups during the Battle of the Atlantic.

More importantly to Franklin Roosevelt, however, was that this visit changed the perceptions of the American people, which in turn allowed him to do more for Britain. When Great Britain declared war on Germany three months later, Americans, due in no small part to the King and Queen's visit, sympathized with United Kingdom's plight; Britons were no longer strangers or the evil colonial rulers from the past but familiar friends and relatives with whom Americans could identify. As Eleanor Roosevelt's May 1940 letter to Queen Elizabeth illustrates (below), a new understanding and desire for cooperation, on both sides, was forged: 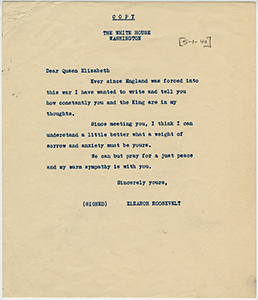 Ever since England was forced into the war I have wanted to write and tell you how constantly you and the King are in my thoughts.

Since meeting you, I think I can understand a little better what a weight of sorrow and anxiety must be yours.

We can but pray for a just peace and my warm sympathy is with you.