FDR: From Budget Balancer to Keynesian

A President's Evolving Approach to Fiscal Policy in Times of Crisis

FDR began his 1932 campaign for the presidency espousing orthodox fiscal beliefs. He promised to balance the federal budget, which Herbert Hoover had been unable to do. Indeed, when FDR came into office, the national deficit was nearly $3,000,000,000.

FDR's budget balancing was not only based on traditional fiscal economics, but also on politics. Roosevelt believed that a balanced budget was important to instill confidence in consumers, business, and the markets, which would thus encourage investment and economic expansion. As the economy recovered, tax revenues would increase making budget balancing even easier. This traditional view that deficits were bad was also supported by public opinion polls.

But the fiscal orthodoxy of budget balancing did not match the reality of the economic situation of an America with nearly a quarter of its working population unemployed. From 1933 to 1937, FDR maintained his belief in a balanced budget, but recognized the need for increased government expenditures to put people back to work. Each year, FDR submitted a budget for general expenditures that anticipated a balanced budget, with the exception of government expenditures for relief and work programs. 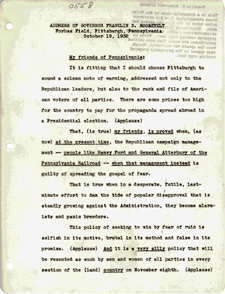 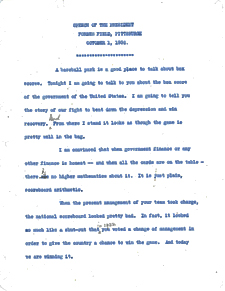 He considered such programs to be emergency in nature, and therefore separate from usual governmental outlays. Such spending brought protests from fiscal conservatives, which FDR answered in 1936 at a campaign speech in Pittsburgh:

To balance our budget in 1933 or 1934 or 1935 would have been a crime against the American people. To do so we should either have had to make a capital levy that would have been confiscatory, or we should have had to set our face against human suffering with callous indifference. When Americans suffered, we refused to pass by on the other side. Humanity came first.

No one lightly lays a burden on the income of a Nation. But this vicious tightening circle of our declining national income simply had to be broken. The bankers and the industrialists of the Nation cried aloud that private business was powerless to break it. They turned, as they had a right to turn, to the Government. We accepted the final responsibility of Government, after all else had failed, to spend money when no one else had money left to spend.

As the economy improved, more Americans were working, and there was an anticipation of increased tax revenues as a result of the recovery. From 1933 to 1937, unemployment had been reduced from 25% to 14% - still a large percentage, but a vast improvement. FDR's reaction was to turn back to the fiscal orthodoxy of the time, and he began to reduce emergency relief and public works spending in an effort to truly balance the budget. The country then lurched into what is now known as the Roosevelt Recession of 1937-1938. Unemployment threatened to rise to pre-New Deal levels, and the economy came grinding to a halt.

Treasury Secretary Henry Morgenthau, Jr., and aides within the Treasury Department favored an approach that sought to balance the federal budget. But other advisers in the President's inner circle, including Harry Hopkins, Marriner Eccles, and Henry Wallace, had accepted the recent theories of British economist John Maynard Keynes, who argued that technically advanced economies would need permanent budget deficits or other measures (such as redistribution of income away from the wealthy) to stimulate consumption of goods and to maintain full employment. It was the reduction of federal spending that these advisers viewed as the cause of the recession. 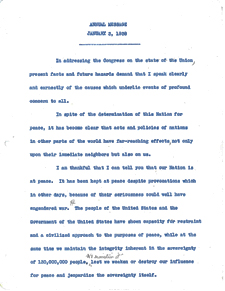 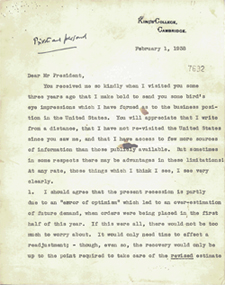 Read the exchange of letters between FDR and J.M. Keynes, 1938.

FDR found these arguments compelling in the wake of the Recession. In his Annual Message to Congress on January 3, 1938, President Roosevelt declared his intention to seek funding for massive government spending without tax increases, and he challenged fiscal conservatives who offered no compelling alternatives during that time of national economic crisis:

We have heard much about a balanced budget, and it is interesting to note that many of those who have pleaded for a balanced budget as the sole need now come to me to plead for additional government expenditures at the expense of unbalancing the budget. As the Congress is fully aware, the annual deficit, large for several years, has been declining the last fiscal year and this. The proposed budget for 1939, which I shall shortly send to the Congress, will exhibit a further decrease in the deficit, though not a balance between income and outgo.

To many who have pleaded with me for an immediate balancing of the budget, by a sharp curtailment or even elimination of government functions, I have asked the question: "What present expenditures would you reduce or eliminate?" And the invariable answer has been "that is not my business -- I know nothing of the details, but I am sure that it could be done." That is not what you or I would call helpful citizenship.

The acceptance by the Roosevelt Administration of what became known as Keynesianism established the precedent of using deficit spending as a vehicle for promoting economic recovery in times of national fiscal crisis. Deficit spending continued throughout the war, when the economy expanded rapidly and employment reached full capacity, with the goal being the successful prosecution of the war. The obvious connection between deficit spending and economic expansion was not lost on many Americans, including business leaders who much preferred large deficits to Keynes's alternative of massive redistribution of wealth through taxation as a way to sustain America's prosperity in peacetime.

FDR's support for deficit spending was yet another shift in the relationship between the government and the people that took place during his Administration. President Roosevelt expressed his vision for a country where each citizen was guaranteed a basic level of economic security most eloquently in his Economic Bill of Rights speech on January 11, 1944:

We have come to a clear realization of the fact that true individual freedom cannot exist without economic security and independence. "Necessitous men are not free men." People who are hungry and out of a job are the stuff of which dictatorships are made.

For more on the Economic Bill of Rights Speech, see the Library's online feature: 1944 State of the Union Address.