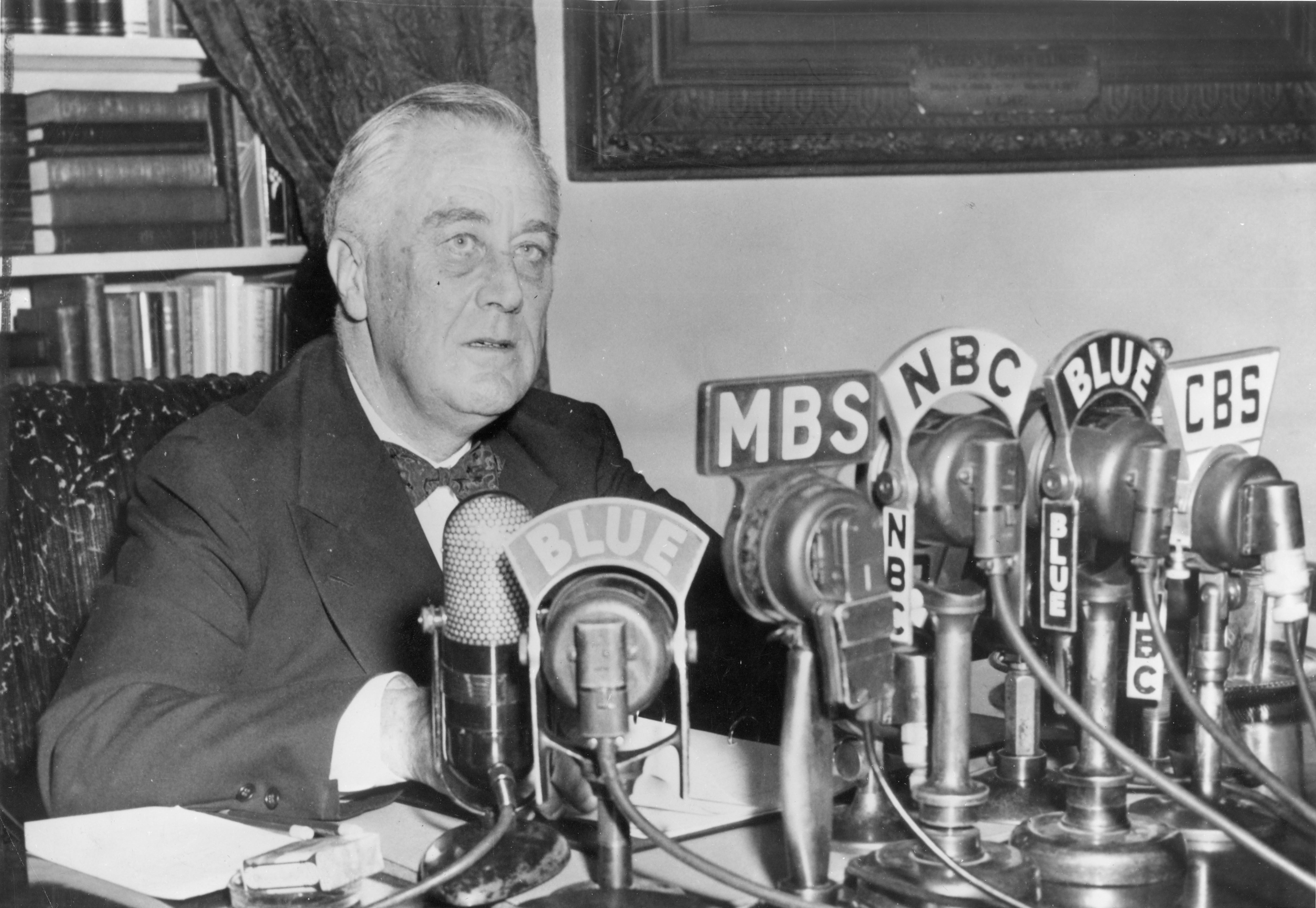 On January 11, 1944, President Franklin D. Roosevelt delivered his annual State of the Union Address to the Nation as a Fireside Chat from the White House. In previous years, the President delivered the State of the Union Address in person before the Congress. But having just recently returned from a grueling trip to the Cairo and Teheran Conferences, President Roosevelt was ill with the flu and chose instead to send a written message to Congress and to read the message to the American people as a whole from the comfort of the White House. Prior to Woodrow Wilson, the President's Annual Message to Congress (now known as the State of the Union speech) customarily had been delivered by presidents to Congress as written reports. By submitting a written message in 1944, Roosevelt was hearkening back to that earlier practice.

Like most of President Roosevelt's White House radio addresses, the 1944 State of the Union message was delivered from the Diplomatic Reception Room on the ground floor of the White House mansion. The scheduled time for the live radio broadcast was 9:00 Eastern War Time.

As was his custom, President Roosevelt selected short excerpts of the longer radio address that were filmed as newsreels to be shown in movie theatres. In these days before television news, the film companies, such as Universal, Paramount, and Fox Movietone, were invited into the White House to film parts of Roosevelt's speeches, which then appeared in movie theaters for several days afterwards to reinforce the President's most important points. The newsreel cameras filmed the excerpts either immediately before or immediately following the live radio broadcast. Typically, still photographers also took photographs before or after the live broadcast.

For the 1944 State of the Union radio address, the President selected two excerpts to read for the newsreel cameras. The first excerpt discussed the recommendations that the President had made to the Congress to stabilize the economy, including a new tax bill, a food price control law, currency stabilization measures, and a national service law. This excerpt was typed on pages separate from the reading copy text of the speech that the President later used on live radio.

The other excerpt that President Roosevelt chose to read for the newsreels is perhaps the most famous portion of the speech. It proposed what the President called "a second Bill of Rights" to provide a new level of economic security to the American people. Unlike the first excerpt that was typed on a separate sheet of paper, the Second Bill of Rights excerpt was marked and read directly from the reading copy of the speech that FDR delivered on the radio.

To the best of our knowledge, no complete film footage of the entire January 11, 1944 State of the Union Speech was made or exists.

The audio-visual collections of the Roosevelt Library include the complete audio recording of the radio broadcast which runs approximately thirty minutes, the copyrighted Paramount newsreel clips of the two excerpts selected by the President, and one public domain photograph of the President delivering the speech. The President's Master Speech File contains the various drafts and the reading copy of the radio speech as well as the drafts for the written message sent to Congress.

If you are interested in learning more about these holdings, please contact the Roosevelt Library archives department at Archives.FDR@nara.gov.

The University of South Carolina's Newsfilm Library contains a major portion of the Fox Movietone News collection. This collection includes the Fox film clips of the two 1944 State of the Union excerpts. There are three sets of the same excerpt clips, each filmed from a slightly different angle. Interestingly, these clips include brief, candid raw footage of President Roosevelt immediately before and after he delivered his presentation for the newsreel. This was edited out prior to running the final newsreel clips in the theaters. The Roosevelt Library has been provided a digital copy of these interesting clips which have been added to our audio-visual collection. Since the original Fox Movietone film is copyrighted and is part of the SC collections we recommend that you contact the SC Newsfilm Library for information on obtaining a copy. You can contact the SC Newsfilm Library through its website: www.sc.edu/library/newsfilm.