Eleanor Roosevelt and the Tuskegee Airmen

Who were the Tuskegee Airmen?

In the 1940’s, the United States Military, like so much of the nation, was segregated. The so-called Jim Crow Laws kept blacks from entering public places such as libraries, restaurants and movie theaters. Although African Americans served in the armed forces, they were restricted in the types of jobs and positions they could hold.

On April 3, 1939, President Roosevelt approved Public Law 18, that provided for an expansion of the Army Air Corps. One section of the law offered hope for those African Americans who wanted to advance their military careers beyond the kitchen or the motor pool. It called for the creation of training programs to be located at black colleges which would prepare blacks for service in a variety of areas in the Air Corps support services.

On January 16th, 1941, the War Department announced the creation of the 99th Pursuit Squadron. This was to be an all black flying unit trained at the Tuskegee Institute founded in Tuskegee, Alabama, by Booker T. Washington in 1881. Charles A. Anderson, a self-taught African American pilot had established a civilian pilot training program at the Institute in 1939. 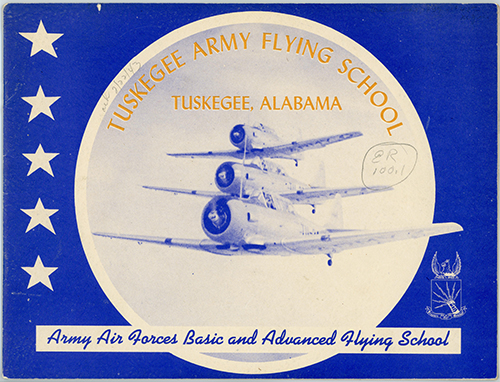 Since there were no black officers, eleven white officers were assigned to train and prepare a total of 429 enlisted men and 47 officers who would become the Tuskegee Airmen, the first black military personnel in the flying school. From 1941 to 1946 over 2,000 African Americans completed training at the Tuskegee Institute, nearly three quarters of them qualified as pilots.

The rest went on to become navigators or support personnel. Together they were known as the Tuskegee airmen. During the war the 99th Pursuit Squadron, which was later renamed the 99th Fighter Squadron, flew in the skies over the Mediterranean and Europe. The missions were primarily as bomber escorts.

The 99th Fighter Squadron had the distinguished record of never losing a bomber to enemy fighters. In addition to shooting down enemy attack aircraft, they also shot down the belief that African Americans were not suited to responsible military service. In 1948 President Truman ordered the desegregation of the United States Military. 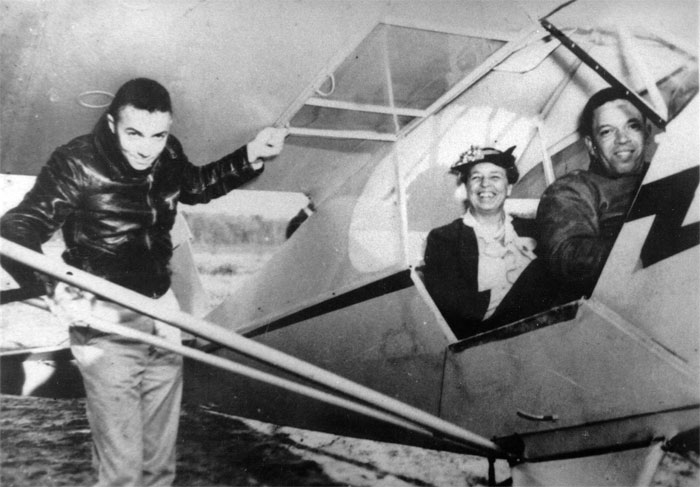 Chief Civilian Flight Instructor Charles Alfred Anderson took Eleanor Roosevelt on an hour-long flight during her 1941 visit to the Tuskegee Institute. Here they are pictured aboard the aircraft shortly after landing. Airforce Historical Research Agency photo.

Support From a First Lady

First Lady Eleanor Roosevelt was very interested in the work at the Tuskegee Institute, particularly in the aeronautical school. During a highly publicized 1941 visit to the Tuskegee Army Air Field, she asked to take a flight with one of the Tuskegee pilots.

Although the Secret Service was anxious about the ride, Chief Civilian Flight Instructor Charles Alfred Anderson, known today as “The Father of Black Aviation,” piloted Mrs. Roosevelt over the skies of Alabama for over an hour.

Flying with Anderson demonstrated the depth of Eleanor Roosevelt’s support for black pilots and the Institute’s training program. Press coverage of her adventure in flight helped advocate for the competency of these pilots and boosted the Institute's visibility. Roosevelt was so impressed with the program that she established and maintained a long-term correspondence with some of the airmen. 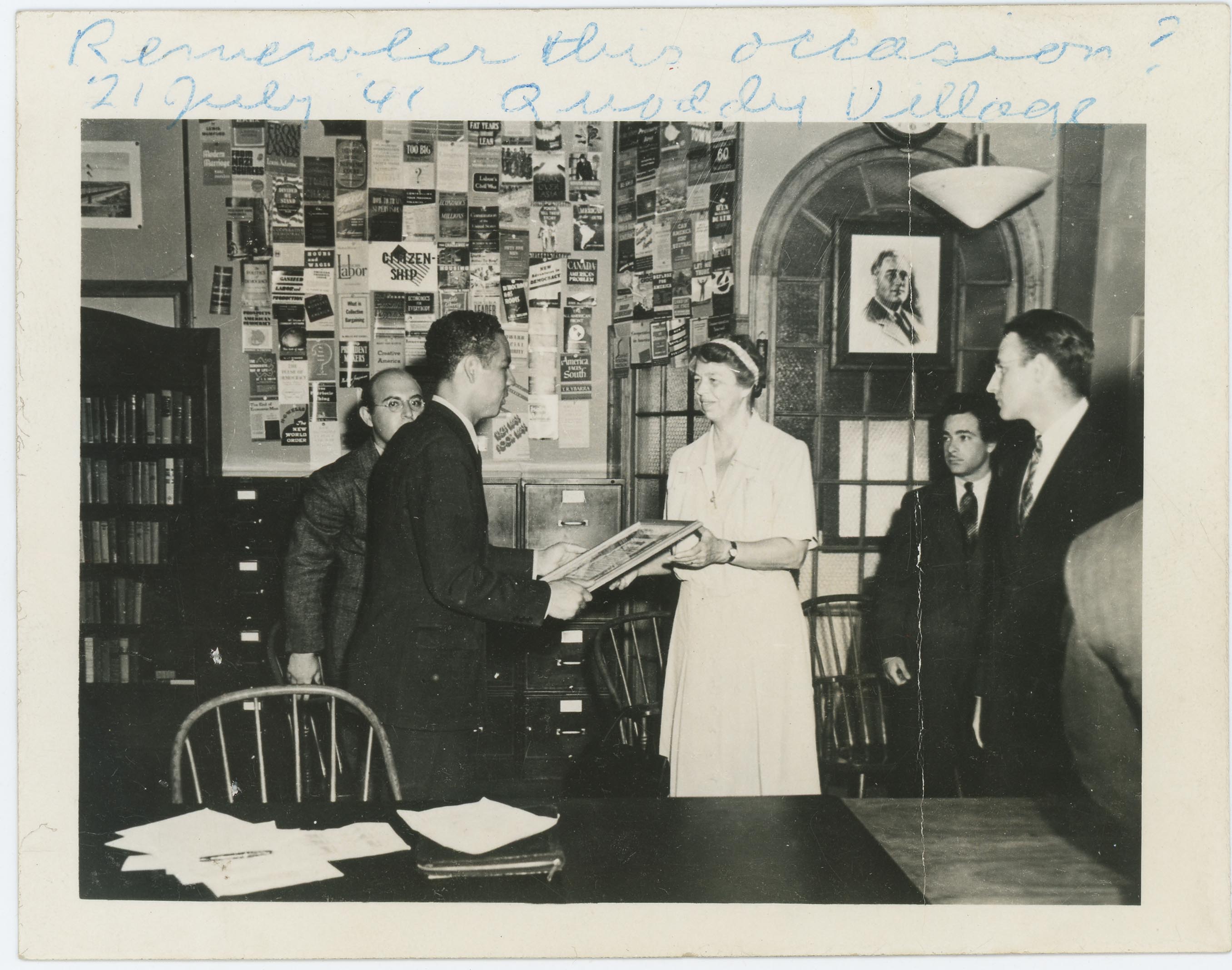 Eleanor Roosevelt had met Cecil Peterson before he became a Tuskegee Airman. Here Roosevelt accepts a plaque offered by Peterson, then representing the Student Government at an NYA-supported program at Quoddy Village, Maine, July, 1941. Peterson wrote on the front of this print: “Remember this occasion? 21 July 41 Quoddy Village.” FDR Library Photo: NPx 79-258. 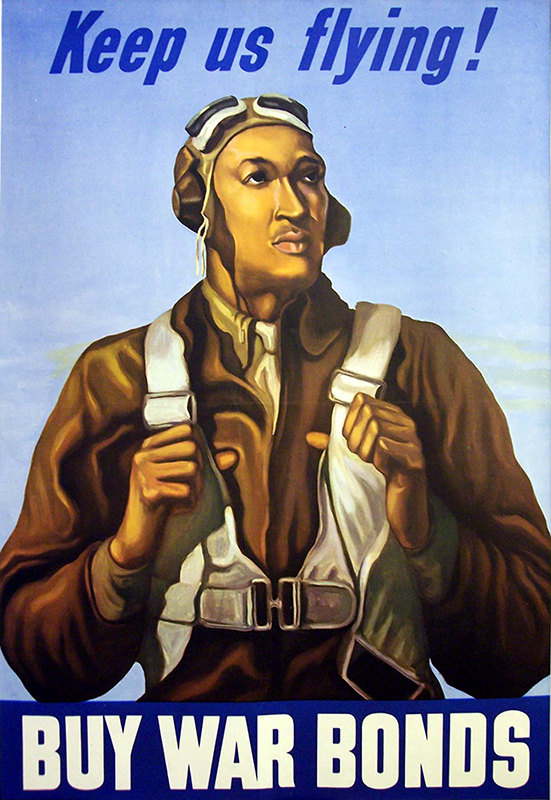