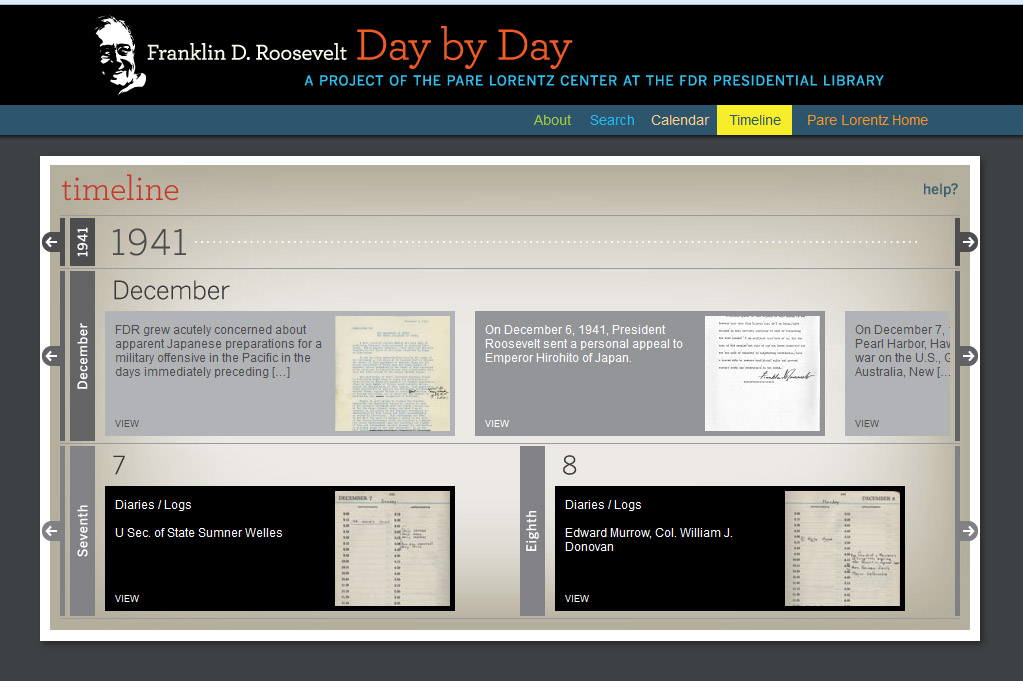 This is an interactive chronology showing Franklin Roosevelt’s daily schedules as President.  With Day by Day you can search for information about FDR's activities from March 1933 to April 1945. You can also follow along the timeline to find historical documents and photographs related to a particular month in history. These schedules, documents, and photographs come from the Archives of the FDR Library.

1920 - Nominated for Vice President on ticket with James N. Cox, but lost to Coolidge and Harding

1899 - ER attends Allenswood, School. Headmistress Madame Souvestre says that Eleanor has a superior intellect and is a born leader.

1918 - ER works with the Red Cross, the Navy Department to help American Servicemen in WWI

1922 - ER writes "Why I Am a Democrat," crystallizing her ideals and commitment to the Democratic Party

1932 - ER states that the country should not expect the new First Lady to be a symbol of elegance but rather, "plain, ordinary Mrs. Roosevelt."

1945 - Regarding FDR's death, ER says " The story is over," and returns to private life at her beloved Val-Kill cottage in Hyde Park.

1945 - ER accepts President Harry Truman's offer to serve as a US delegate to the United Nations.

1947 - Begins work on drafting the Declaration of Human Rights

1952 - ER resigns from the UN delegation after the election of Republican President Eisenhower.