The Roosevelts: An Intimate History

Since Ken Burns' documentary The Roosevelts: An Intimate History aired on PBS, the Franklin D. Roosevelt Library and Museum has experienced an overwhelming upsurge in interest. The museum galleries are full, and the parking lots are overflowing. Visits to the Library's website jumped 650% during the week that the film aired. Research requests to the Library's archives and museum doubled, and sales in the New Deal Store increased 39%.

The Roosevelts: An Intimate History chronicles the lives of Theodore, Franklin and Eleanor Roosevelt, three members of the most prominent and influential family in American politics. The 14-hour series marks the first time their individual stories have been woven into a single narrative, and it is the first time that PBS premiered such a film in two-hour blocks over seven consecutive nights.

The Franklin D. Roosevelt Presidential Library and Museum in Hyde Park, New York, assisted Burns’ Florentine Films production team throughout the entire process of making the film. The first visit to the Roosevelt Library by Florentine staff happened in May 2009. Over the course of the next five years, the Roosevelt staff helped the crew in researching, understanding, and filming the Library’s archival and museum collections. The Library staff also assisted renowned Roosevelt biographer Geoffrey C. Ward as he honed the film’s script and wrote the accompanying book. 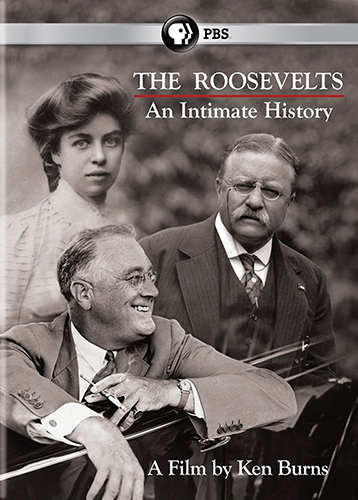 The entire process was collaborative and collegial, with the Florentine team sharing the digital by-products of their labors and the Library offering suggestions for documents, photographs, and objects to use in the film. And it can be said that the Florentine crew survived the Library’s three and half year renovation right along with the Library staff. During the film project, the Florentine team worked in the pre-renovation research room in 2009, moved right along with the staff to the temporary research room in the Library’s Wallace Visitor Center in 2010, and moved back to the renovated Library in 2013. Burns’ team also worked closely with the National Park Service, which operates the Home of FDR National Historic Site on the same grounds as the Library.

Ken Burns made a special visit to Hyde Park on June 12, 2014, to preview the excerpts from the film to a packed audience in the Wallace Visitor Center. Afterwards, Ken Burns and Geoff Ward hosted a special lunch where they personally thanked the staffs of the Roosevelt Library and the National Park Service for their assistance in creating The Roosevelts: An Intimate History – an epic documentary that will bring the world of the Roosevelts to a whole new generation. 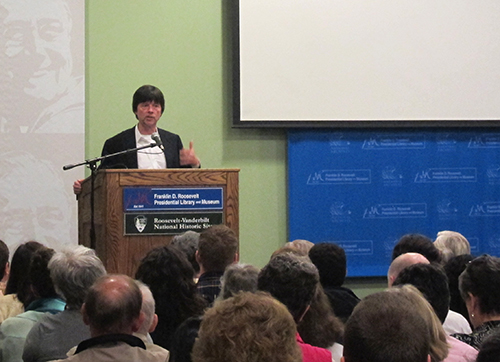