Margaret "Daisy" Suckley, a distant cousin who was also a friend and confidante to Franklin D. Roosevelt, was born in 1891 in Rhinebeck, New York. She gave Roosevelt his famous dog, Fala, and was with him in Warm Springs, Georgia, when he died. Daisy was also one of the first archivists at the Franklin D. Roosevelt Presidential Library & Museum. She was responsible for managing the Library's large photograph collection, using her intimate knowledge of President Roosevelt's life to identify the people and places in the photos. Daisy lived in Rhinebeck, NY until her death in 1991, six months before her 100th birthday.

Margaret “Daisy” Suckley was born December 20, 1891 at her family home, Wilderstein, in Rhinebeck, New York. She was the fifth child and first daughter of her parents, Elizabeth Phillips Montgomery and Robert Bowne Suckley (rhymes with Book-ly). Both parents came from wealthy families. During Daisy’s childhood, her parents’ attempted to continue the lifestyle of a wealthy Hudson River family. In fact, Daisy’s father listed “gentleman” as his occupation on his passport.

The family divided their time between Wilderstein and a residence in Manhattan. However, Wilderstein was expensive to maintain. A period of economic instability forced the Suckleys to close Wilderstein and move to Switzerland, where they would live for the next ten years. Daisy and her siblings spent this time in relative isolation. There were no children at the hotel where they lived, so Daisy learned to identify with the older generation, rather than her peers. When the Suckleys returned to the United States, Daisy was sixteen and didn’t know anyone outside of her family. 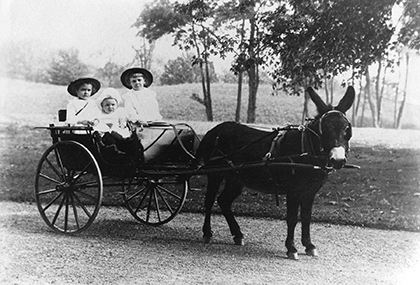 The Suckley children in their donkey cart, ca. 1892. Photo courtesy of Wilderstein Preservation.

After their return, Daisy’s father wanted his daughter to attend college. Her mother, however, was firmly against the idea. She believed college made women too worldly and “unmarriageable.” In the end, Daisy compromised. She would attend Bryn Mawr College, but only for two years. Afterwards, she returned home to help her mother maintain the home and look after the many guests they were always entertaining. She still led a sheltered life, but World War I helped expand her horizons. She spent summers selling war bonds door-to-door in Rhinebeck and volunteered as a nurse’s aide at a hospital on Ellis Island during the winter. This was also a time of tragedy for Daisy. Her oldest brother, Henry, was killed during a bomb raid while driving a Red Cross ambulance in Greece in 1917. Four years later, Daisy’s father died suddenly from a heart attack. Always close to her father, Daisy was devastated. Now, the family’s fortune lay in the hands of her eccentric brother, Robert.

Following a series of bad investments coupled with the crash of 1929, much of the Suckley wealth was lost. Daisy’s sister, Elizabeth, also returned to Wilderstein with her husband and their three children, having suffered losses of their own. Daisy took a job with her aunt, Sophie Langdon, as a paid companion, and found herself the caretaker of Wilderstein and its inhabitants. She divided her time between Mrs. Langdon’s home in Manhattan and Rhinebeck, using her salary to support her family. By now, Daisy had resigned herself to a life taking care of her family. She accepted her duties, but longed for more.

Modern photo of the restored Wilderstein estate in Rhinebeck, NY. Courtesy of the Wilderstein Preservation.

In the spring of 1922, Sara Delano Roosevelt invited Daisy to tea at Springwood. Sara told Daisy her son was lonely and she hoped a familiar face and some company would cheer him up. Franklin D. Roosevelt was in Hyde Park that spring recovering from a case of infantile paralysis, which left him paralyzed from the waist down. Daisy saw Franklin a few times that spring, keeping him company while he did his exercises and watching while he struggled to regain control of his legs. It wasn’t until Roosevelt’s 1933 Presidential Inauguration, however, that their real story began. Roosevelt invited Daisy to attend his inauguration that year and afterward a close friendship, one that would last the rest of Roosevelt’s life, began.

Daisy was quiet, unobtrusive, and overlooked by history, but she was also one of Roosevelt’s closest friends. After the 1933 inauguration, Daisy corresponded with Roosevelt regularly. He spoke with her about the presidency and she worried about his health. They also sent each other small gifts and shared secrets. In his letter dated September 23, 1935, Roosevelt writes to Daisy, “Do you know that you alone have known that I was a bit ‘cast down’ these past weeks. I couldn’t let anyone else know it – but somehow I seem to tell you all those things and what I don’t happen to tell you, you seem to know anyway!” Daisy saw Roosevelt almost every time he was in Hyde Park and even visited him in Washington, D. C. When in Hyde Park, Roosevelt would take Daisy for drives and they would explore the Hudson Valley together.

On September 22, 1935, Daisy and FDR visited a hill in Dutchess County during one of their drives. Thereafter, Daisy and Roosevelt would affectionately refer to Dutchess Hill as “Our Hill.” They began to discuss plans for a cottage there (eventually Top Cottage would be built on this spot) and Daisy started to collect books for “Our Library.” Eventually, Roosevelt shifted his plans and instead of a cottage for the two of them to disappear to after retirement, he envisioned an escape from life as President. This is what it would eventually become, but Daisy always fondly remembered the time they spent on “Our Hill.”

As time progressed, their correspondence lost the flirtatious undertones, but the closeness remained. Roosevelt confided in Daisy, telling her about secret political meetings, such as the Atlantic Charter Conference. She still visited him in Washington and they continued to meet for tea and go for drives when he came to Hyde Park, but Daisy no longer believed they would be sharing the cottage on top of their hill after Roosevelt retired. Instead, she enjoyed his company, continued their correspondence and cherished the small comforts she could provide for him. One such comfort arrived in 1940 in the form of a Scottish terrier puppy. 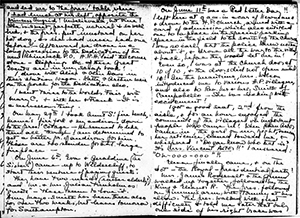 In 1939 the King and Queen of England paid an unprecidented personal visit to the US. They were invited by Roosevelt to Hyde Park where the Royal couple attended church services, took a driving tour with FDR, and enjoyed a hot dog picnic at Top Cottage. Suckley also attended many of those royal festivities and described the details in her diaries, now housed in archival collections at Wilderstein Preservation in Rhinebeck, NY. Above is an excerpt showing her June 1939 entries.

In 1940, Daisy presented President Roosevelt with his Scottie, Fala. A friend of Daisy’s had a litter of Scottie puppies and gave one to Daisy. She trained the puppy for six months before presenting him to President Roosevelt. Fala was Roosevelt’s constant companion for the next five years and is considered one of the most popular Presidential pets.

Fala also spent a lot of time with Daisy. When Roosevelt traveled to places he could not bring Fala, the dog was frequently left in Daisy’s care. Daisy also took care of Fala whenever she accompanied President Roosevelt and the dog. She would walk him and make sure he didn’t get into any trouble. Fala also sired puppies with Daisy’s own Scottie, Button.

In 1942, Daisy wrote a book titled The True Story of Fala, which gave readers a glimpse into Fala’s busy life. After Roosevelt’s death, Daisy took Fala home with her, believing FDR wished her to care for him. However, after a visit from James Roosevelt (FDR’s son), she returned the dog to Eleanor Roosevelt, who would keep him for the rest of his life

In 1941, Daisy’s life changed again. Her aunt, Sophie Langdon, passed away on August 3. Daisy had been earning a living and supporting her family by acting as her aunt’s companion since the early thirties. Now, she was without a job and her family was without an income.

In September, Roosevelt gave Daisy a job at the new FDR Library in Hyde Park. She would work part time as a junior archivist, sorting Roosevelt’s personal and family papers, earning $1,000 a year. Not only did this solve Daisy’s financial problems, it gave them more opportunities to see each other regularly.

Daisy worked as an archivist at the FDR Library for 22 years. While Roosevelt was still alive, her job consisted of organizing his papers and books. FDR was constantly bringing new things up to the library – papers, books, and objects for the museum. The original library staff was responsible for organizing the material and arranging the museum. After Roosevelt’s death, the library continued organizing his material. Daisy even cataloged the entire contents of both the President's Study at the Library, and of Top Cottage, room by room, creating a master list of the objects and where they were placed. After FDR's death, Daisy no longer spent much time dealing with the manuscripts in the collection. Instead, she worked with the photographs, identifying subjects and creating a filing system. With Daisy’s help, thousands of photographs were cataloged.

Daisy was with President Roosevelt in Warm Springs, GA when he died on April 12, 1945. She was on the train that bore FDR’s body to Washington, D. C. and attended the burial at Hyde Park, NY. She returned to the library, continuing her work, until 1963. Daisy remained at Wilderstein, caring for her family until she was the only one left. In 1980, Wilderstein Preservation was formed to maintain the legacy of her Hudson River home.

She died in her home on June 29, 1991, her 100th year. The people in Roosevelt’s life never suspected Daisy of being exceptionally close to him and it wasn’t until after Daisy’s death that their close friendship was revealed. When friends came to Wilderstein to clean out Daisy’s room, they found an old black suitcase under her bed. Inside were letters from Roosevelt, Daisy’s own letters to Roosevelt (returned by Anna Roosevelt after FDR’s death) and countless diary entries detailing Daisy’s time with FDR.

Daisy’s time with Roosevelt was remarkable. Because of her relationship with him, she was present for some of the most interesting events of the time. She was there when the King and Queen of England came to the United States and picnicked with the Roosevelts and when Winston Churchill dined at Springwood. She met royalty, such as the Empress of Austria, the Queen of the Netherlands and the Prince and Princess of Norway. She knew about secret meetings, such as the one held between Roosevelt and Churchill, during which the Atlantic Charter was created. Her close relationship with the President allowed Daisy to witness history first hand.

She also kept diaries throughout her life, recording details of meetings seemingly without any idea of their political significance. Instead, she discussed what the people were like, what kind of food they ate, and what Fala was up to. Her diaries offer a unique perspective on some of the most historically significant moments of the 20th century.

Daisy seemed to recognize how lucky she was, writing in her diary on November 10, 1943, “It is certainly not in the simple & natural course of the life of a Suckley to be seeing, at first hand, the very core & hub of world history – It is fantastic – But here I am!”

More about Daisy and Wilderstein 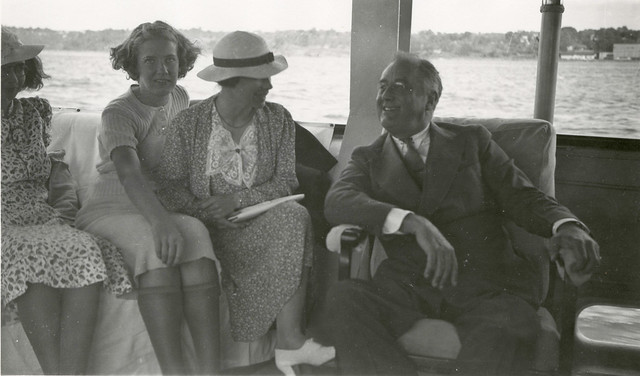