Leon A. Perskie and the Story of the President's 1944 Campaign Portrait

On Sunday, August 20, 1944, renowned portrait photographer Leon A. Perskie received a mysterious call at his home in Baltimore, Maryland, where he had expanded the family’s photography business from Atlantic City in the mid-1930s. According to Perskie’s recollections, the caller instructed Perskie to leave that day for Poughkeepsie and bring along his camera equipment.

He was then to go to a particular restaurant, and call a special telephone number for further instructions. Perskie did as he was told and left right away, arriving in Poughkeepsie in Dutchess County, New York, shortly after 1:00 a.m. on August 21st. When he made the requested call, the Secret Service answered, and he was immediately taken to a hotel in Rhinebeck for a few hours of sleep. At 10:00 a.m., he was picked up and taken to the home of Franklin D. Roosevelt, the President of the United States. Perskie had been brought to Hyde Park to take the official 1944 campaign portrait for FDR.

Leon Perskie was no stranger to the President. Leon had assisted his father, Jacob H. Perskie, in taking earlier photographs of Franklin Roosevelt in 1932, 1936, and 1940. The elder Perskie also was a gifted etcher and painter, and one of his portraits became the official image of Roosevelt during the 1932 campaign. When Jacob Perskie died in 1941, Roosevelt telegrammed his widow that “I have heard with deep regret of the great sorrow which has come to you in the passing of your devoted husband who was my faithful friend.”

Now, in 1944, Roosevelt turned to his friend’s son, Leon. Upon arriving at the Roosevelt home, Leon was instructed to select a room to take a portrait. He chose the spacious library with its fireplace and walls of books. As Perskie later recalled, “Then the President – famous smile and all – came into the room…I made several takes – and I can say without reservation that he is the most patient man I ever had sit for a picture.”

One of the black and white takes became the official 1944 portrait used throughout the campaign. But Perskie also experimented with color photography at the same sitting. His dramatic full color images bring to life the color of FDR’s eyes, something rare to see in the black and white world of the Depression and World War II era.

The color portraits taken by Leon Perskie remained unseen by the public until donated to the Roosevelt Library, along with over 20 black and white takes, by his daughter Beatrice Perskie Foxman and her husband Dr. Stanley B. Foxman in 2009. August 21, 2014 marks the 70th anniversary of these important images. 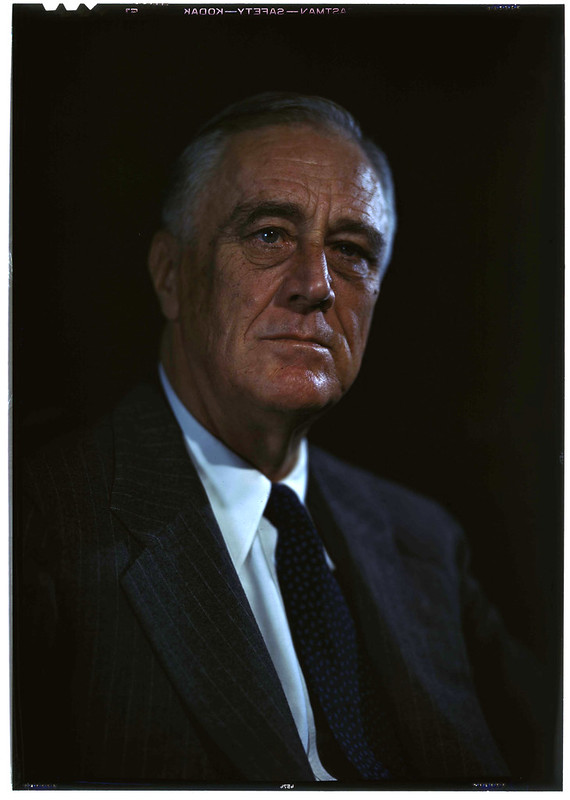 This slide show includes the two full color portraits, the official 1944 campaign portrait, and a selection of other poses of Franklin Roosevelt taken by Leon Perskie on August 21, 1944.