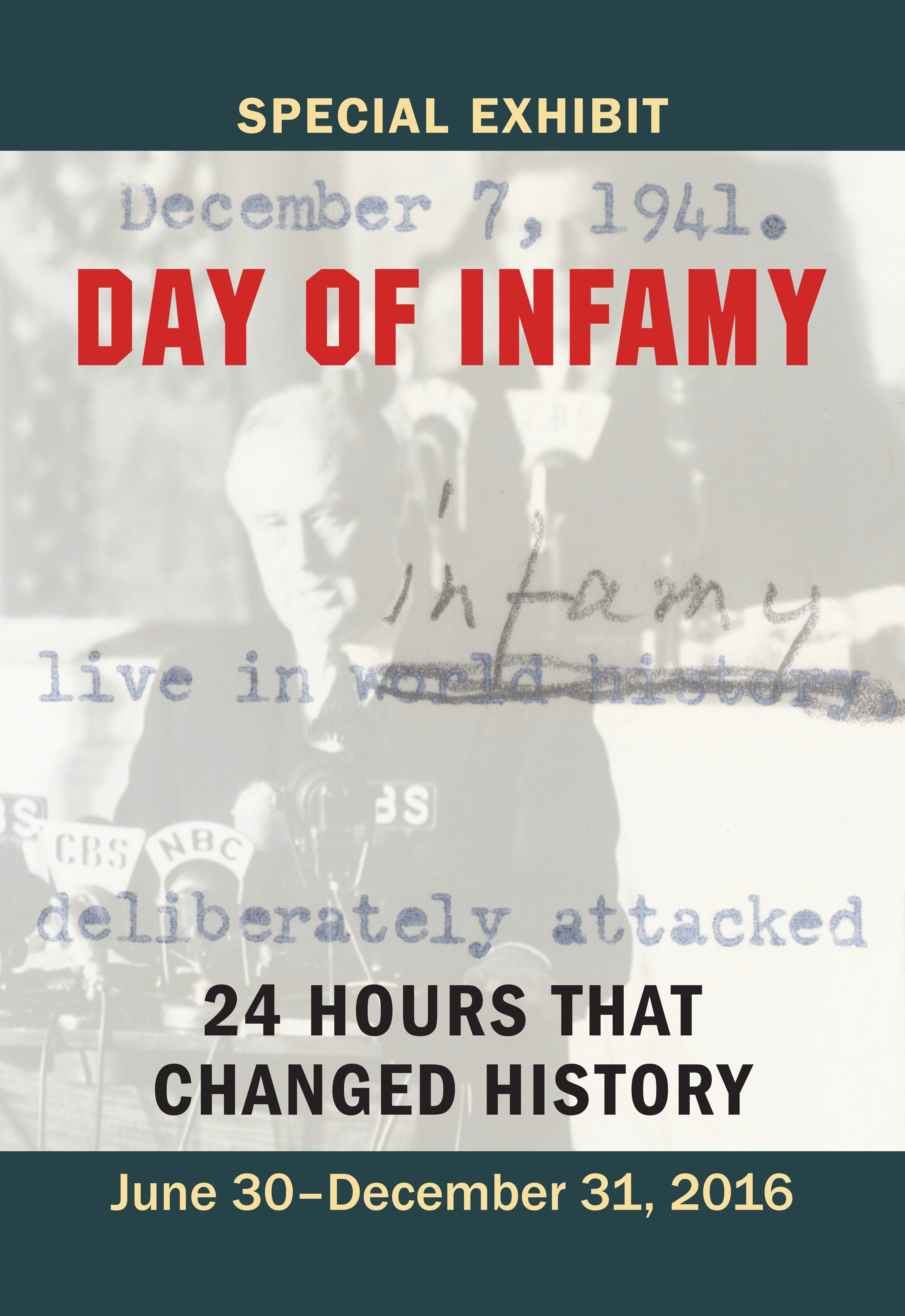 On June 30, 2016, the Franklin D. Roosevelt Presidential Library and Museum will open a new major special exhibition entitled "DAY OF INFAMY: 24 HOURS THAT CHANGED HISTORY" in commemoration of the 75th anniversary of the Japanese attack on Pearl Harbor. The exhibit will be on display in the Library's William J. vanden Heuvel Gallery through December 31, 2016. On June 30, 2016, the Library -- including the special exhibition -- will be open from Noon and 6:00 p.m., with free admission.

During 2016 Americans will commemorate the 75th anniversary of one of the most pivotal events in modern history -- the Japanese attack on Pearl Harbor on December 7, 1941. Japan's surprise attack shocked the nation and instantly plunged the United States into World War II. It proved to be a decisive turning point in American and global history.

To mark this historic anniversary, the Franklin D. Roosevelt Presidential Library and Museum is presenting a major special exhibition that gives visitors a behind-the-scenes view of FDR and his inner circle of advisers during the pivotal 24 hours that followed the Japanese assault. Those 24 hours were among the most dramatic and consequential of the Franklin Roosevelt's long presidency. They ended with one of his finest moments.

The "DAY OF INFAMY" exhibition begins at 1:47 pm (EST) on December 7, when President Roosevelt was informed of the attack. It concludes in the early afternoon ofDecember 8, when he delivered his famous "Day of Infamy" address to a joint session of Congress and signed the declaration of war with Japan. Visitors move through this 24-hour period with Roosevelt, experiencing its drama and confusion as it unfolds, hour by hour.

The exhibit's highlight is one of the most fabled and treasured items in the Roosevelt Library's vast collections -- FDR's hand-amended first draft of his "Day of Infamy" speech. This historic document is rarely placed on public display and will likely not be on view again for a decade. It is among a series of key documents featured in the exhibit that were seen, dictated, or written by the President and important military and civilian advisers during this 24-hour period. They include Army and Navy updates, diary entries by Cabinet members, security memos, drafts of press releases, and personal letters.

"DAY OF INFAMY" also features dramatic audiovisual programs, including film of the Pearl Harbor attack, a series of interactive touchscreens that provide visitors with updates on the evolving military situation in the Pacific, and audio stations where visitors can access first person testimony (found in oral histories, diary entries and memoirs) from key individuals who were with FDR on December 7.

Visitors will also be able to view a new digitally re-mastered, high definition film of FDR's entire 6 ½ minute "Day of Infamy" speech to Congress. This enhanced version of that famous speech will have its debut in this exhibition. It was specially prepared by the National Archives and Records Administration's Audio and Video Preservation Lab in a project supported by a generous grant from AT&T.

"DAY OF INFAMY" concludes with a section entitled "Remembering Pearl Harbor, 1941-2016" that recalls the pivotal nature of the events of December 7 and highlights their continuing importance and relevance to the United States in the post-9/11 world. It includes a multi-screen video program, narrated by CBS news anchor Scott Pelley, that explores how the memory of Pearl Harbor continues to exert a profound influence on our defense, intelligence, and foreign policies.