"While we have long been able to hear Roosevelt’s support for public health and medical research, now we can see him state some of his powerful words from this important speech, and truly appreciate the experience of being in the audience on that historic day." -- Staff of the National Library of Medicine

Recently the National Library of Medicine shared rarely seen footage of Franklin D. Roosevelt's October 31, 1940 address at the National Institute of Health in Bethesda, Maryland. The President officially dedicated the new National Cancer Institute along with a new central campus for the NIH. His speech voiced strong support for public health and medical research. The footage is now available on YouTube and via the NLM's blog.

Click here to view and read about this important footage. 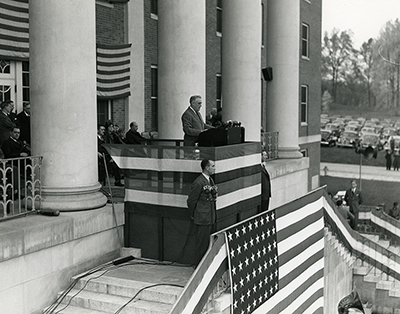 Transcript of the Speech:

Nowhere in the world except in the Americas is it possible for any nation to devote a great sector of its effort to life conservation rather than to life destruction.

All of us are grateful that we in the United States can still turn our thoughts and our attention to those institutions of our country which symbolize peace—institutions whose purpose it is to save life and not to destroy it. It is for the dedication of these noble buildings to the service of man that we are assembled here today.

The National Institute of Health speaks the universal language of humanitarianism. It has been devoted throughout its long and distinguished history to furthering the health of all mankind, in which service it has recognized no limitations imposed by international boundaries; and has recognized no distinctions of race, creed or color. 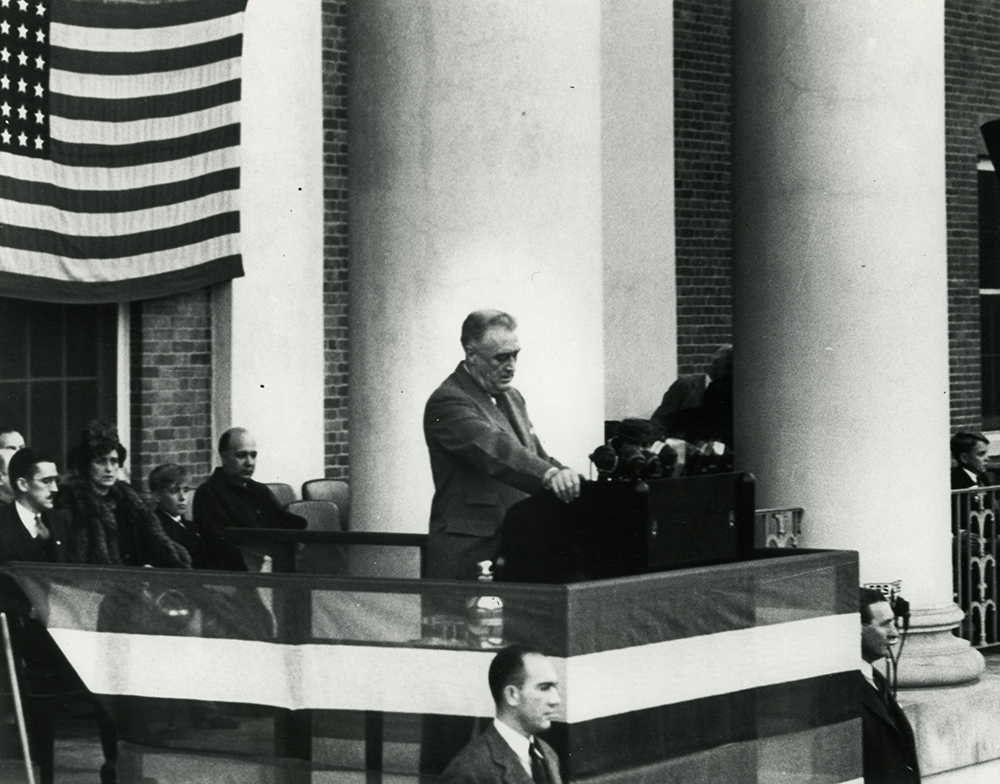 The total defense which this nation seeks involves a great deal more than building airplanes, ships, guns and bombs.

We cannot be a strong nation unless we are a healthy nation. And so we must recruit not only men and materials but also knowledge and science in the service of national strength. And that is what we are doing here.

We have recognized the strategic importance of health by the creation of a Health and Medical Committee in the Council of National Defense itself. That Committee has the job of coordinating the health and medical aspects of national preparedness. This Committee is assisting the Government in the mobilization of the medical and health resources of the country to serve the best interests both of the military and the civilian elements of the nation.

To do this will require the best energies of the professional and technical leadership of our country.

To do this will require the fullest cooperation between the Government and the hospitals, the medical, dental, nursing and other professions. We seek the same partnership that we seek for industrial production in the Advisory Commission.

Neither the American people nor their Government intends to socialize medical practice any more than they plan to socialize industry. In American life the family doctor, the general practitioner, performs a service which we rely upon and which we trust as a nation.

No one has a greater appreciation than I of the skill and self-sacrifice of the medical profession. And there can be no substitute for the personal relationship between doctor and patient which is a characteristic and a source of strength of medical practice in our land.

Although we have still much to do, the nation today, I am very certain, is better prepared to meet the public health problems of our emergency than at any previous time in the history of the country.

Since the passage of the famous Social Security Act with' its health provisions in 1935, Federal, State and local health and medicine are cooperating more broadly than ever before.

Our people are better informed on health matters than ever before.

Scientific knowledge of the causes of disease and also the conditions for health has exceeded any previous limits.

Facilities for health and medical service are more numerous and they are better.

The Public Health Service of the United States is a very old institution and has done magnificent work, but it is only recently, in the past few years, that the Federal Government has indicated that it can do infinitely more. Disease disregards State as well as national lines and among the States there is, as we know, an inequality of opportunity for health. In such cases the Public Health Service is helping and must continue even more greatly to help.

That partnership—and I emphasize that word in regard to health and medicine throughout the land—is making definite progress against many diseases.

Among the buildings of the National Institute of Health to be dedicated here today stands the National Cancer Institute, created through provisions of the Act which I signed on August 5, 1937.

The work of this new Institute is well under way. It is promoting and stimulating cancer research throughout the nation; it is bringing to the people of the nation a message of hope because many forms of the disease are not only curable but even preventable. Beyond this, it is doing research here and in many universities to unravel the mysteries of cancer. I think we can all have faith in the ultimate results of these great efforts.

These buildings, which we dedicate, represent new and improved housing for an institution that has a long and distinguished background of accomplishment in this task of research.

The original demonstration of the cause and method of preventing pellagra, for example, has been followed by other important contributions. Great work has been done in the control of tularemia, Rocky Mountain spotted fever, typhus fever, yellow fever, malaria, and psittacosis.

Now that we are less than a day by plane from the jungle type yellow fever of South America, less than two days from the sleeping sickness of equatorial Africa, less than three days from cholera and bubonic plague, the ramparts we watch must be civilian in addition to military.

For the very beautiful and very spacious grounds on which these buildings stand we are indebted to Mr. and Mrs. Luke I. Wilson, who wrote to me in 1935 asking if a part of their estate at Bethesda, in Maryland, could be used to the benefit of the people of this nation.

I would tell her now, as she sits beside me that in the compassion of Mr. and Mrs. Wilson for suffering, in their hope for human action to alleviate it, she and her husband symbolize the aspirations of millions of Americans for a cause such as this, and we are very grateful.

Today the need for the conservation of health and physical fitness is greater than at any time in the nation's history. In dedicating this Institute, I dedicate it to the underlying philosophy of public health; to the conservation of life; to the wise use of the vital resources of the nation.

I voice for America, and for the stricken world, our hopes, our prayers, our faith in the power of man's humanity to man.