Images of Internment: The Incarceration of Japanese Americans During World War II 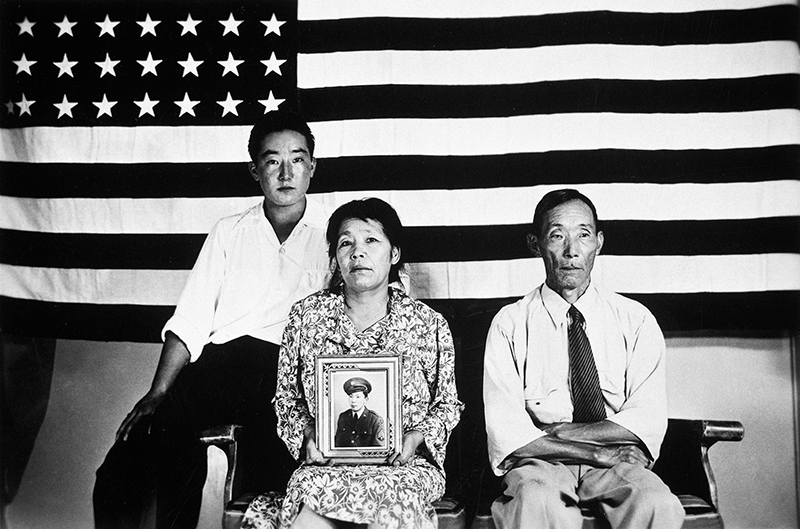 On February 19, 2017 -- the 75th anniversary of the signing of Executive Order 9066 -- the Franklin D. Roosevelt Presidential Library and Museum opened a new photographic exhibition entitled, IMAGES OF INTERNMENT: THE INCARCERATION OF JAPANESE AMERICANS DURING WORLD WAR II, with over 200 photographs including the work of Dorothea Lange and Ansel Adams. Signed by President Franklin D. Roosevelt, Executive Order 9066 led to the incarceration of 120,000 people of Japanese descent -- including approximately 80,000 American citizens -- during World War II. The exhibit will be on display in the Library's William J. vanden Heuvel Gallery through December 31, 2017. Regular hours and admission apply.

In the tense weeks after Japan's December 7, 1941 attack on Pearl Harbor, many Americans -- particularly those on the Pacific Coast -- feared enemy attack and saw danger in every corner. Rumors and sensational media reports heightened the climate of fear. Under pressure from military and political leaders, President Roosevelt issued Executive Order 9066 on February 19, 1942. It is widely viewed today as a serious violation of civil liberties.

IMAGES OF INTERNMENT begins with a small document-focused display that briefly introduces the context behind FDR's decision to issue Executive Order 9066. It includes the role of First Lady Eleanor Roosevelt, who disagreed with FDR's decision. In April 1943, the First Lady visited an internment camp. Shortly after that the Japanese American Citizens League presented her with a painting of the Topaz camp by Chiura Obata (1885-1975), a Japanese American artist who was confined there. Mrs. Roosevelt displayed the painting in her New York City home until her death in 1962. It is included in the exhibition.

Visitors then enter the exhibition's main gallery where they will encounter over 200 photographs (including some reproduced in dramatically large formats) that provide a visual record of the forced removal of Japanese Americans and their lives inside the restricted world of the remote government camps operated by the War Relocation Authority (WRA). Most of these images were shot by skilled photographers hired by the WRA. The WRA visual records (held at the National Archives and Records Administration in College Park, Maryland) include the work of Dorothea Lange, Clem Albers, Francis Stewart, and Hikaru Iwasaki. IMAGES OF INTERNMENT also features photographs taken by Ansel Adams at the Manzanar camp and a selection of photos shot by George and Frank Hirahara, who were held at the Heart Mountain camp in Wyoming.

The exhibit includes a short film that features excerpts from oral history accounts of Japanese Americans in which they describe their experiences. There is also a video presentation of President Ronald Reagan's remarks when he signed the 1988 bill that provided an official government apology and cash payment to each surviving person covered under Executive Order 9066.

The National Archives holds hundreds of thousands of records relating to the internment, including the personal records of those detained, films of life in the camps, and documentation of the administration of the camps.

In conjunction with our current special exhibition, IMAGES OF INTERNMENT, the Roosevelt Library is presenting this exhibit of contemporary images by photographer and ceramicist Setsuko Winchester.

During 2015-2016, Winchester traveled the nation on a 16,000-mile journey to visit locations associated with the incarceration of 120,000 people of Japanese descent during World War II. At each place, she created a photograph featuring 120 yellow tea bowls that she created in her Massachusetts studio. Each bowl symbolizes 1000 individuals. Their color, Winchester notes, “represents the ‘Yellow Peril,’ as Asians were euphemistically referred to at the time.”

“My project may throw light on a discomfiting part of American history,” she observes, “but I hope not to condemn or blame, but help gauge where we are in this ever-evolving experiment we call ‘America.’” 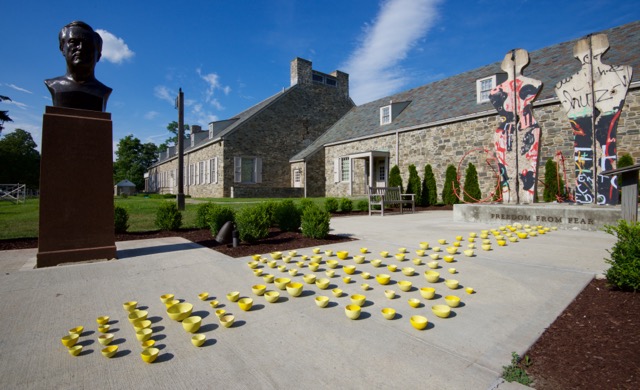 A “yellow” shadow of a man cast in Freedom Court at the FDR Library and Museum. July, 2016 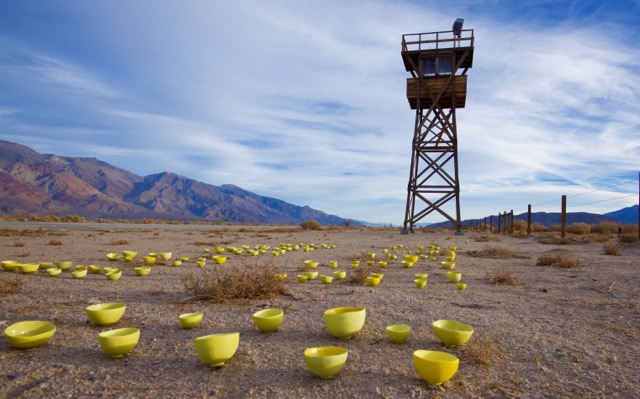