FDR and the Four Freedoms Speech

Franklin Roosevelt was elected president for an unprecedented third term in 1940 because at the time the world faced unprecedented danger, instability, and uncertainty. Much of Europe had fallen to the advancing German Army and Great Britain was barely holding its own. A great number of Americans remained committed to isolationism and the belief that the United States should continue to stay out of the war, but President Roosevelt understood Britain's need for American support and attempted to convince the American people of the gravity of the situation.

In his Annual Message to Congress (State of the Union Address) on January 6, 1941, Franklin Roosevelt presented his reasons for American involvement, making the case for continued aid to Great Britain and greater production of war industries at home. In helping Britain, President Roosevelt stated, the United States was fighting for the universal freedoms that all people possessed. 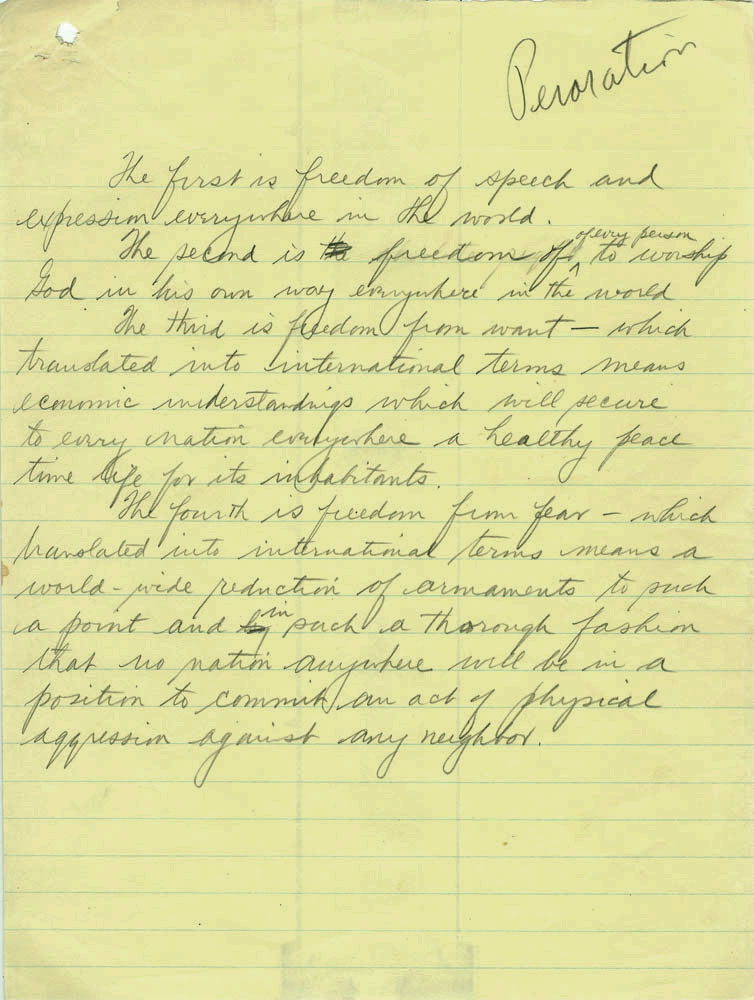 View evolution of the Four Freedoms in drafts

Roosevelt’s preparation of the Four Freedoms Speech was typical of the process that he went through on major policy addresses. To assist him, he charged his close advisers Harry L. Hopkins, Samuel I. Rosenman, and Robert Sherwood with preparing initial drafts. Adolf A. Berle, Jr., and Benjamin V. Cohen of the State Department also provided input. But as with all his speeches, FDR edited, rearranged, and added extensively until the speech was his creation. In the end, the speech went through seven drafts before final delivery.

The famous Four Freedoms paragraphs did not appear in the speech until the fourth draft. One night as Hopkins, Rosenman, and Sherwood met with the President in his White House study, FDR announced that he had an idea for a peroration (the closing section of a speech). As recounted by Rosenman: “We waited as he leaned far back in his swivel chair with his gaze on the ceiling. It was a long pause—so long that it began to become uncomfortable. Then he leaned forward again in his chair” and dictated the Four Freedoms. “He dictated the words so slowly that on the yellow pad I had in my lap I was able to take them down myself in longhand as he spoke.” 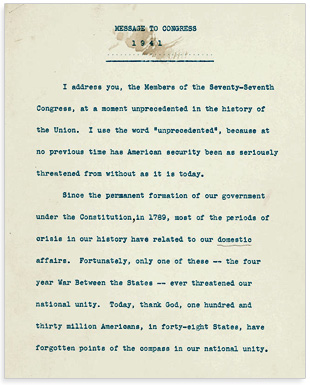