Document of the Month - September

The Beginning and the End of World War II

At 2:50 AM on September 1, 1939 President Franklin D. Roosevelt awakened when the phone beside his bed rang with grim news: the German Army was invading Poland. Roosevelt understood immediately that this meant a larger war, for Great Britain and France had pledged to come to Poland’s defense if Germany attacked. World War II had begun. Having just been informed of the German invasion, FDR wrote a note on the pad beside his bed and indicated that the time was 3:05 AM. Below is a copy of that note.

By the time the war was concluded on September 2, 1945 with the Japanese surrender to American forces on the deck of the USS Missouri, more than 60 million people had been killed, nations were decimated, and the world’s military, political, economic and social orders were rewritten. Sadly, President Roosevelt died on April 12, 1945. His death came just five months short of the “absolute victory” he had pledged in what is commonly referred to as the “Day of Infamy” speech delivered on December 8, 1941. Roosevelt’s courage, determination and leadership ensured that victory would go to the Allied Forces. 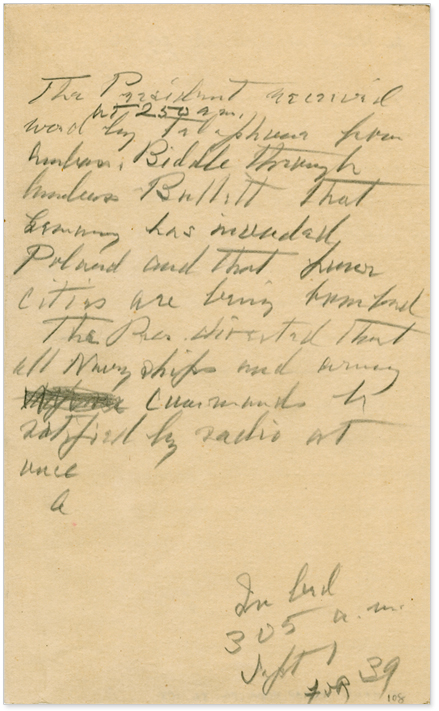 Here are some things to consider and discuss after reviewing FDR’s bedside note: