Document of the Month - January

The President's Birthday Balls and the Drive to Defeat Polio

Franklin D. Roosevelt was born on January 30, 1882 at Springwood, his family’s estate overlooking the Hudson River in Hyde Park, New York. His parents were Sara Delano and James Roosevelt.  Franklin would enjoy an active early life. He explored the woods on foot or on horse back and sailed on the river and developed an interest in, and love of nature, history and public service.

In 1921, when he was thirty-nine years old, he contracted infantile paralysis, more commonly known as polio. Though the disease left him unable to walk, he was determined to go on setting and meeting goals for himself. One of these became the search for therapeutic treatments, and ultimately a cure, for polio.

In 1927 FDR formed the Warm Springs Georgia Foundation to pursue the goal of finding therapeutic treatments. This organization later became known as the March of Dimes. One innovative way to raise funds began on January 30, 1934, the president’s 52nd birthday, when 4,376 communities across America joined together to hold 600 Birthday Balls. Some of these events were black-tie galas, others were held as dance marathons and potluck suppers. They all shared the common goal of raising funds to fight polio, the most dreaded disease of the day.

Throughout the Great Depression and World War II people flocked to movie theaters as a source of entertainment and information. News reels kept them up-to-date on events in the country and around the world. Tapping into this vast audience, the Motion Picture Theatres organization raised money for the president’s efforts to defeat polio by collecting money from movie goers. Below is an exerpt from a 1943 Report of Collections by Motion Picture Theatres showing the success of their public campaign to end polio.

In 1955 Jonas Salk, with funding from the March of Dimes, developed a vaccine that stemmed the spread of this terrifying disease. 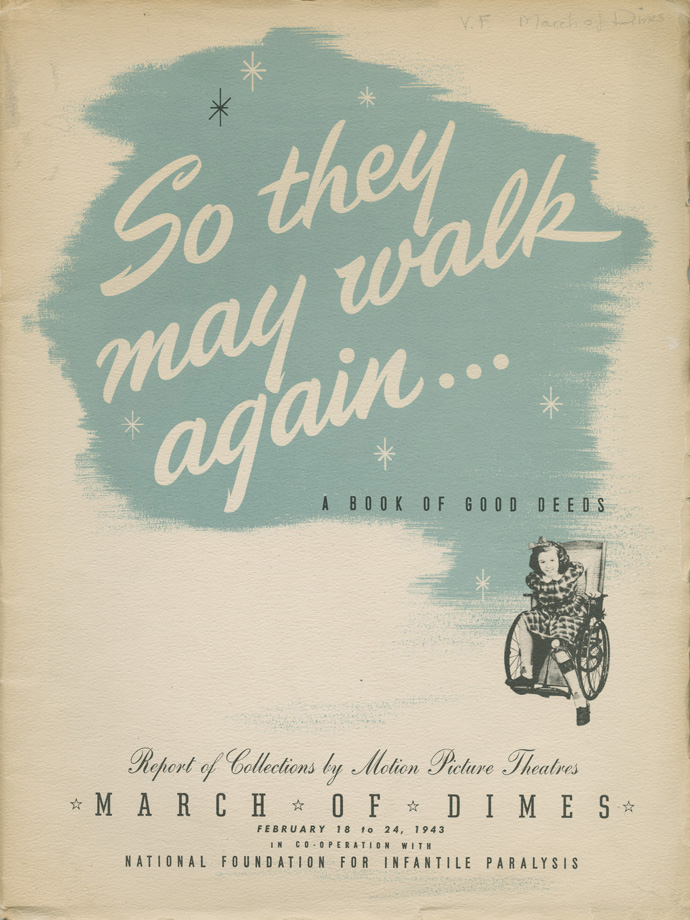 Here are some things to consider and discuss after reviewing the Report of Collections by the Motion Picture Theatres: