Document of the Month - August

Franklin D. Roosevelt was born on January 30, 1882. As a boy he spent many hours exploring the woods on foot or on horse back, sailing on the river and developing an interest in, and a love of nature, history and public service.

In August 1921, when he was thirty-nine years old, he was on vacation at his family’s Campobello retreat when he contracted infantile paralysis, more commonly known as polio. Initially the disease affected nearly his entire body, but eventually settled in his legs. Unable to stand or walk without assistance, he was determined to go on setting and meeting goals for himself. One of these goals became the search for therapeutic treatments, and ultimately, a cure for polio.

In 1927 FDR formed the Warm Springs Georgia Foundation to pursue these goals. This organization later became known as the March of Dimes and with the help of many groups, organizations, and ordinary citizens, it raised millions of dollars to combat polio. In 1955 Jonas Salk, with funding from the March of Dimes, developed a vaccine that stemmed the spread of this terrifying disease.

FDR took a great personal interest in combating polio and he occasionally worked with patients himself at the treatment center he created at Warm Springs. Below is a letter written by FDR to Dr. William Egleston in October 1924 in which he details the onset of his disease and offers suggestions for treatment based upon his own first hand accounts. 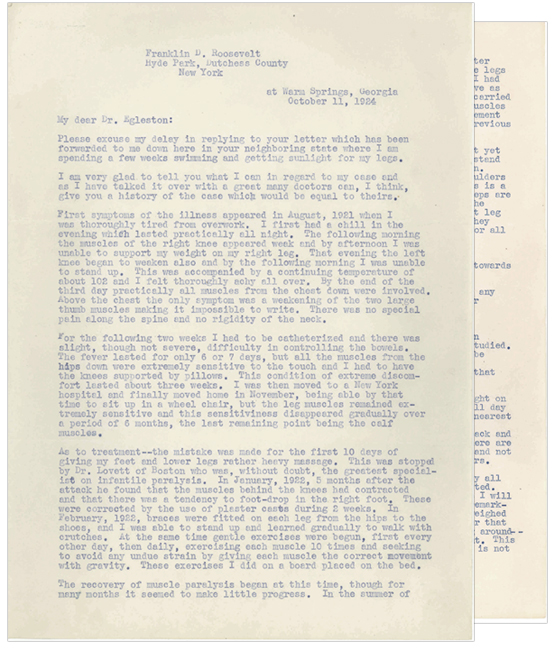 Here are some things to consider when reviewing FDR’s letter to Dr. Egleston: