President Franklin D. Roosevelt commissioned the construction of a library and museum to house his vast collection of papers, books, and memorabilia.

Many previous presidents donated their papers to the Library of Congress, but this was not the best fit for Roosevelt. Not only was his collection too expansive for that institution at the time, but Roosevelt was concerned about having all of the nation's important documents housed in only one place. Instead, he built a new facility on a 16 acre section of his mother's home in Hyde Park, NY – an institution that would become the nation's first presidential library.

From Idea to Creation

Roosevelt believed presidential papers were an important part of the national heritage and should be preserved for future generations. Prior to Roosevelt's time in office, a president's papers were considered his personal property. George Washington set this precedent when he took his papers with him upon completion of his second term. He brought his papers to Mount Vernon, intending to build a library for them. Unfortunately, that idea was never realized. As a result, there were no clear disposition procedures for presidential papers.

Over the next 142 years, presidential papers were saved, stored, scattered, sold, and even cut apart for autographs. Some papers were devoured by rats while others were destroyed by fire. Zachary Taylor's papers were lost in 1862 when Union soldiers set them ablaze after occupying his son's Louisiana home, and Chester A. Arthur burned three garbage cans full of his papers in 1886, the day before he died.

Transcript from a July 4, 1940, Sweetheart Soap Series radio show in which Eleanor Roosevelt discussed the developing Library (first three pages only). From the Speech and Article File, Eleanor Roosevelt Papers.

The Library of Congress began collecting presidents' papers during the early 1900s and had managed to gather the papers of 23 heads of state by the late 1930s. Roosevelt not only had a very sizable collection of personal papers, but also books, audio-visual materials, and memorabilia. He disliked the idea of breaking up his collection, so he decided to build his own library to house a wide range of materials. This library would also house, at the conclusion of his presidency, all of the papers created while he was in office. He planned to donate all of these materials, and the new building, to the federal government's recently established National Archives.

The building project was funded privately and cost a total of $376,000. Roosevelt was involved in the planning of the Library from the beginning. An early sketch drawn by FDR in 1937 closely resembles the location and layout of the eventual Library. By 1941, during FDR's third term in office, the Library was complete; the exhibits were in place and the President was ready to dedicate the Library and turn it over to the American People. 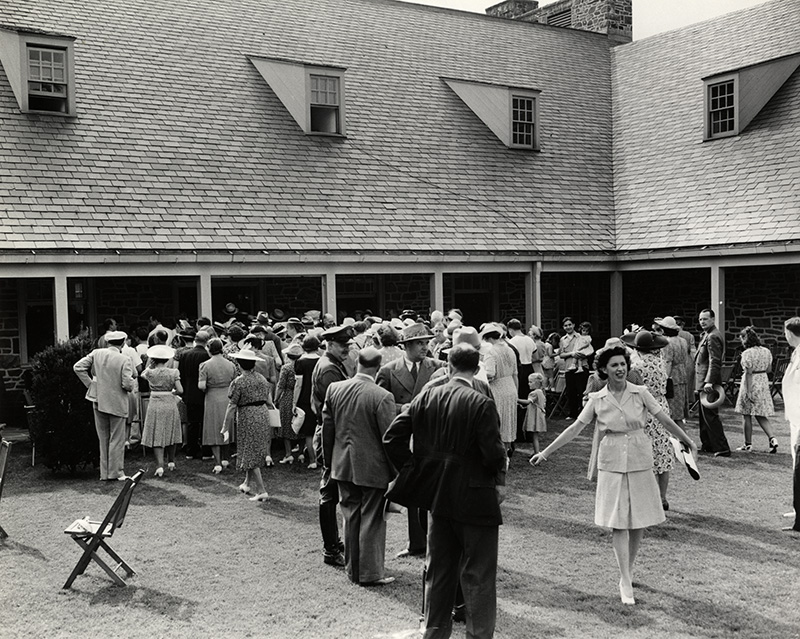 The official Library dedication was a small, quiet affair, with close friends and family attending the ceremony. No formal invitations were issued, but a small article appeared in the paper a few days before the ceremony inviting Roosevelt's Hudson Valley neighbors to join them for the dedication at 4pm on June 30, 1941. A few speeches were given, and the Library was officially opened to the public.

He touched on the importance of keeping records safe and said he believed this library to be "proof – if any proof is needed – that our confidence in the future of democracy has not diminished in this Nation and will not diminish."

Democracy was a theme in his speech, acting as a subtle reminder of world events. He said the Library was being dedicated at a time when "government of the people by themselves is being attacked everywhere," and warned against accepting information as fact just because it was given out by "certain types of self-constituted leaders" – no doubt a reference to Adolf Hitler.

To ensure the continued success of the Library, President Roosevelt appointed a Board of Trustees to oversee the Library in collaboration with the National Archives. Dr. Conner was named Chairman of the board, and Secretary of the Treasury, Henry Morgenthau, Jr., was named an ex-officio member. In addition, five men were named trustees for life, four of whom were sworn in during the dedication: Basil O'Connor, Roosevelt's former law partner; Samuel I. Rosenman; Samuel Morison, a historian from Harvard University; and Frank Walker, United States Post Master General. Harry Hopkins, the fifth trustee for life, was unable to attend the ceremony.

Roosevelt also recognized the success of the Library was due to the "interest and loving care of a great many people," mainly his friends and neighbors. He expressed his belief that these friends and neighbors would all be "in a sense Trustees of this Library through the years to come."

As he closed the ceremony, Roosevelt shared his hope that "millions of our citizens from every part of the land will be glad that what we do today makes available to future Americans the story of what we have lived and are living today."

The Franklin D. Roosevelt Library opened to mixed reviews in 1941. The library project had been criticized since its announcement. Some people saw it as a monument to Roosevelt, rather than a repository for pieces of history that could be used by the people for years to come.

After the dedication, an article in the Spokesman Review compared Roosevelt to Julius Caesar, saying Caesar "also had a way of perpetuating himself in office and of erecting monuments to himself." An article in the Chicago Tribune called the Library a "memorial [to Roosevelt] which the public was invited to build and the nation . . . was invited to maintain," saying the Library was Roosevelt's own Westminster. These reports portrayed the Library simply as "a shrine to commemorate [Roosevelt] and his works," without realizing the historical significance.

Other newspapers, such as the Poughkeepsie New Yorker, focused on the importance of the Library, what it meant for the community, and what it would mean for the nation as a whole. Calling the Library dedication an event of "outstanding significance," the PNY also recognized that it would take time for people to appreciate the new Library. They were confident that, eventually, thousands of people would visit to study Roosevelt, his presidency, and the time period because, "'the Presidency is the most powerful office in the world . . . Whether one agrees or disagrees fully with that leadership, the fact remains that it is making history.'"

With the creation of his Library, President Roosevelt set a precedent for the disposition of a president's papers and paved the way for the Presidential Libraries Act of 1955 and the Presidential Records Act of 1978. Today, a president's papers are considered public property, and each president follows the tradition of privately building a library where his papers are housed after he leaves office. The library, along with an endowment for building maintenance, is given to the National Archives and Records Administration after it is completed. Each new presidential library serves as a reminder of the precedent set by President Roosevelt when he created his library, and each library represents an important part of American history.