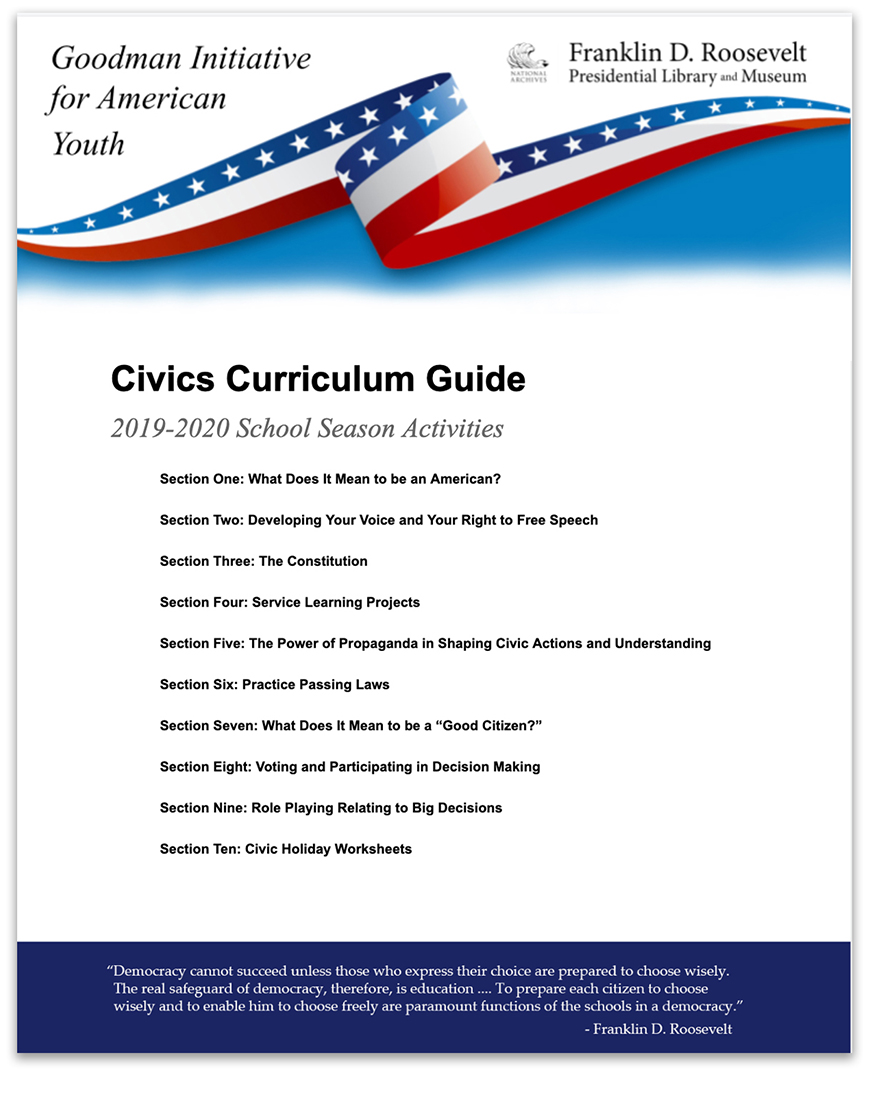 Twenty-eight activities for the 2019-2020 Goodman Initiative for American Youth Civics Program, presented in ten sections centered on key civic themes and topics. The activities can be used in any order and at any time throughout the year. Feel free to modify them, and the extension activity ideas, to best suit your style of teaching and the needs of your students.

Sections are available individually below:

Activity 1: A Simple Question - what does it mean to be an American?

Activity 2: Ambassador from Mars - presenting America to a visitor from space

The activities in this section will explore the following civic concepts: community, values, consensus, rights and responsibilities.

To get students to consider what characteristics, values, beliefs, ideals and virtues define and unite us as Americans.

Activity 5: Write a Letter to the President - expressing your views

Activity 6: Highlighting the Importance of Free Speech - the First Amendment and the Four Freedoms

Activity 7: Make Your Own Great Seal – make a seal that shows what you stand for

In a democracy, the will of the people is what drives the actions of the government. In our democracy “we the people” have the opportunity to directly register our opinions and have our voices heard on Election Day. That’s when we cast our vote for the candidates we feel best represent us.  But we need not wait-out election cycles to let our leaders know what’s on our mind. We can communicate our views at any time through letters, emails, phone calls or by speaking up at town hall meetings or ‘meet-the-candidates events.”

The activities in this section will explore the following civic concepts: political expression, right to assemble, finding your voice, sharing and expressing views.

This activity is designed to help students clarify their thinking and to learn that making their voice heard, especially to our elected leaders is an important part of our democratic system.

Activity 8: A Classroom is a Community - what it means to be part of a community

Activity 9: Creating a Classroom Constitution -creating their own constitution

Activity 10: Is the Preamble making the Grade? - evaluating and “grading” how well the Constitution is meeting its own stated goals

The Constitution of the United States is the document that lays out the rules for how our country is run. It creates, and describes the functions of the three branches of government (Legislative, Executive and Judicial). The Constitution celebrates it “birthday” on September 17th and was created in 1789. It consists of just four pages enshrined at the National Archives in Washington D.C. At the time it was created, some people were worried that the structures set up in the Constitution were too strong and that the people needed some guaranteed rights and protections. And so the Bill of Rights (the first 10 Amendments) were added.

The activities in this section will explore the following civic concepts: participation,  deliberation and debate, consensus and compromise, community, rights and responsibilities.

To show students that communities (such as classrooms and countries) need rules in order to function and maintain order.

Activity 11: Participating in a Service Learning Project - learning about people with needs by serving others in the community

Service learning is where the theory of civic engagement crosses over to real world experience. A great deal of the research on civic engagement and learning about civics focuses on the importance of service learning opportunities. Students learn valuable skills like communication, organization, teamwork, empathy and follow-through as they experience authentic learning and humbling satisfaction by helping others in their community.

Service learning is often seen as more appropriate for high school and college students, but with proper planning and guidance, elementary school students can develop important skills and help a great number of people in the process as well.

This activity will explore the following civic concepts: empathy, service to others, participation and involvement in the community, communication, organization, teamwork, sharing.

To get students to understand the needs of people in their community by participating in a service project of their choosing.

Activity 14: A Picture is Worth a Thousand Words - write the story the poster tells

Activity 15: Advertising Verses Propaganda - how we are influenced by what we see

Activity 16: Impact and Effect - how a poster speaks to us

Activity 17: Themes and Subtexts - additional messages under the surface

From April to December 2018, the Roosevelt Presidential Library and Museum featured an exhibit titled The Art of War: American Poster Art 1941-1945 consisting of more than 200 propaganda posters from World War II. The activities in this section are based on that exhibit.

World War II (1939 to 1945) was the largest military conflict in the history of the world. The very survival of Democracy was challenged across the globe. In the United States, an armed force of over 12 million rose to the challenge and tens of millions of civilians rallied their support on the “Home Front.” To ensure that every American understood what was at stake, and to encourage them to do their part, the government organized a number of propaganda initiatives. The most sharply focused efforts came in the form of colorful posters designed and created by the country’s most talented illustrators and graphic designers.

The work was organized through a number of government agencies including: the Office for Emergency Management; the Office of War Information; and the Treasury Department and through a number of private organizations such as the War Advertising Council and Artists for Victory. Famous artists such as Norman Rockwell, Theodore Geisel (Dr. Seuss) and the Walt Disney lent their creative talents to the war effort.

In the age before television and the internet, posters were a powerful medium to communicate simple, but important, messages to the American public. The propaganda posters were displayed in store windows, factories, offices, railway waiting rooms, subways, restaurants, schools, post offices, town halls, billboards, telephone poles, walls, and fences.  As one wartime Office of War Information official asserted, these posters should be “shouting at people from unexpected places with all the urgency which this war demands.”

The activities in this section will explore the use of images, symbols and wording to invoke a sense of patriotism, engagement, action and unity in times of national crisis.

To get students to realize that their thoughts, emotions and actions can be powerfully influenced by symbols, colors, and messaging.

Activity 19: There Ought to be a Law - debating and deciding legislation

Laws and rules are necessary to establish and maintain order in our classes as well as our communities.

Each year tens of thousands of bills are introduced in the Congress of the United States. The same is true for the 50 state legislatures and the 3000 county legislatures and the countless towns and villages in the United States, but our focus here is the national government and the Congress of the United States. The process these bills must undergo is lengthy and complicated, requiring many hours of research and debate and a great deal of trading and compromise. Only a few hundred make the journey from the introduction hopper to committees, to floor action to passage in both houses of the legislature. Those that do are still subject to the approval (or not) of the president. The process is difficult by design allowing many groups, organizations and individual voices to weigh in and possibly influence or defeat what is being proposed. It is democracy, an often messy process that intentionally makes change difficult, slow, and gradual. And it has been working in this country for over 230 years!

This activity is designed to engage students in formulating, promoting, debating, deliberating, compromising and reaching consensus as they practice the art of self-governance.

To get students to understand that making rules and laws is a complicated process that takes a great deal of deliberation, debate, and compromise.

Activity 20: “What Makes a Good Citizen?” Interview – what it means to be a “good citizen”

One of the primary roles of education is to instill in students the insights and skills they will need to be “good citizens.” To be clear, the use of the term citizen here is not meant to be political in any way. It is used in the broadest definition possible, that is to say, without concern for if a person was born here, became naturalized or is simply in the United States. One could just as easily use the term, “a member of a community or group.” Your students are “citizens” of your classroom but were not born there, you could say they were “naturalized” when they were assigned to your classroom, but mostly they are simply members of the group of students that are your class.

So the next question is, “What does it mean to be a good citizen?” More concisely, “What are the traits or behaviors associated with being a good citizen?” Why is it important for people to exhibit these traits? What happens when they don’t?

Activity 21: Informed Voting  - knowing and understanding what you are voting for

Activity 23: Including and Empowering Students in Classroom Decisions - practice in helping to set the agenda

Our system of government was designed to be of the people, for the people, and by the people. Our right to vote for our leaders at the local, state and national levels every two, four or six years is a privilege which many people in the world can only dream about. Yet many people in the United States, for many reasons, don’t bother to vote. By failing to do so they forfeit the opportunity to have their voices heard and they forfeit the right to be part of the decision making process. Put bluntly: if you don’t vote – you don’t count.

The activities in this section will explore the following civic concepts: informed voting, participation, elections, living with the consequences of decisions.

To familiarize students with the practice of voting, making informed decisions and living with the consequences of collective decision-making.

Activity 24: What Would You Do? Problems at the Play Ground / United Nations

Activity 25: What Would You Do? School Supply Shortage / Social Security

Activity 26: What Would You Do? Trouble at the Table / Japanese American Internment

Activity 27: What Would You Do? To Go or Not to Go? Eleanor Roosevelt & the DAR

One of the many hurdles in getting young people to learn and understand civic skills and behaviors is the disconnect they feel in being able to impact real world decisions as children. To them, the activities of being a good citizen - voting, paying taxes, and interacting with the legal world – all seem like activities that will only be available to them when they are grown up. The truth is that these activities require skills like communication, cooperation, compromise, teamwork, and participation, skills they can (and should) be developing now. The extent to which we master these skills as young people creates the space and ability to participate and succeed later in life.

The activities in this section will explore the following civic concepts: communication, cooperation, compromise, teamwork, participation, resource allocation and deliberation.

The activities in this section will help students recognize that the skills used by adults to handle complex real world problems are the same skills they use to handle problems in their own lives.